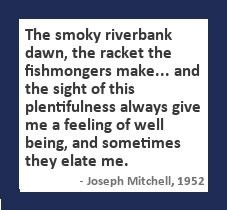 The South Street Seaport’s low-scale buildings have a legacy of combined retail and tourism. A sense of the district’s gritty and boisterous past as New York City’s wholesale fish market also lingers in some of the area’s oldest commercial buildings. These brick and stone structures also have historic ties to the East River, the Brooklyn Bridge, and the piers.

The Seaport district has long been a laboratory in which historic preservation has taken place alongside development. The South Street Seaport Museum was founded in the 1960s; an exacting restoration of Schermerhorn Row took place in the 1970s; Pier 17 was developed in the 1980s by The Rouse Company; and mixed-use preservation and development has been underway along Front Street in recent years. Each project has explored new designs while drawing on the visual richness of the Seaport’s historic and natural environments.

The historic buildings west of the Franklin D. Roosevelt (FDR) Drive have stood for more than a century. East of the FDR, stands the historic Tin Building. The 1907 structure was once a thriving marketplace where the city’s fish was imported and processed. It originally stood at water’s edge, prior to the construction of the current Pier 17 building. A fire in 1995 all but destroyed the 55,000-square-foot building, leaving it vacant today, and awaiting a grand restoration.

The cobblestone-paved “uplands” west of the FDR includes the red brick Fulton Market Building on Fulton and Front Streets. The second floor of that three-story building currently houses the wildy popular Bodies: The Exhibition.

In the surrounding Seaport area, GGP and the City are working to reconnect and improve existing open spaces. In collaboration with the Parks & Recreation Department, construction is underway on the redesign of Titanic Park, which will serve as the gateway to The Seaport. Additionally, construction is also underway on Burling Slip, home to the new Imagination Playground. Soon, Peck Slip will be converted to a public park as The Seaport area is redesigned and upgraded, thereby furthering the evolution of the downtown cityscape and waterfront.